Cathy Bi-Riley is a community organiser with Te Ohu Whakawhanaunga. Before moving to Auckland, she worked for five years in advocacy and research with Caritas Aotearoa New Zealand. She was deeply involved in her neighbourhood of Newtown, Wellington with the Anglican lay order of Urban Vision and as a community youth worker. For the month of February, she has been training with various Industrial Areas Foundation alliances in the Northwest of the United States and Canada. This is a reflection of her time with Spokane Alliance. 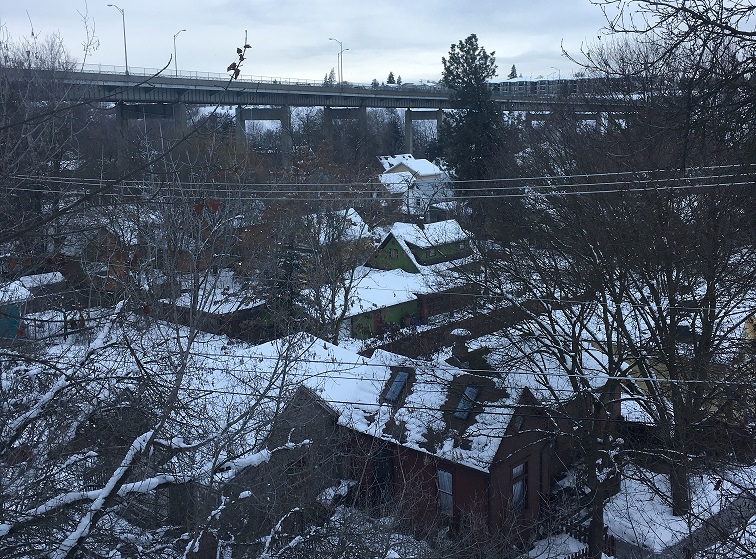 Spokane is a city in eastern Washington state with a population of about 210,000 people. I arrived in mid-February just in time for the snow. Here I spent time with community organisers Katie Ashmore and Carol Pritchard, and their team of volunteer leaders from union, faith and community institutions. Supported by the organisers, these deeply committed volunteer leaders from diverse backgrounds worked closely together to tackle issues related to health equity, meaningful jobs, housing, and tax reforms. I was very curious about how they got here.

Spokane Alliance was founded in 2002 with 32 due paying member institutions. One of their first actions after founding was to protect the Spokane bus system after a State-level funding cut. They needed to pass local tax legislation to make up 40 per cent of the public transport budget. With plenty of relational power built over the two years of sponsoring committee phase, the new alliance organised over 100 volunteers to go strategically door knocking in areas that would be affected. Together they raised public support for the tax levy referendum. In just four months, the campaign had been won. This was one of the many Spokane Alliance victory stories.

I joined in at the February Spokane Alliance leader's retreat. A member from the Firefighter's Union shared how difficult relational organising was at first and how important it has now become for his institution and their alliance involvement. It required shifting from being task focused, to being relationship focused.

Before jumping into action, the alliance leaders invest time to sit down with each other and with members of their own organisation. The power of the alliance comes from people's ability to act together across differences. They need to have a good understanding of each other in order to leverage their shared interests without fracturing when facing challenges. 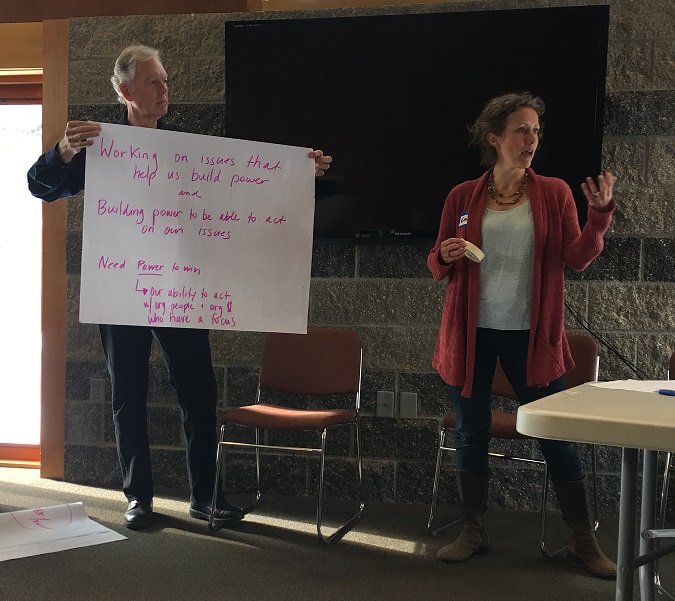 One area where I witnessed relational organising in action, was with the West Central Neighbourhood team. West Central is a low-income area in Spokane. Abandoned rundown houses nicknamed ‘zombie houses’ dot the neighbourhood. Meanwhile, people experiencing homelessness seek out churches with warming centres or cram into friends' basements. A retired pastor Woody Garvin is working with the Spokane Alliance to organise in this neighbourhood.

Over the last year, Woody has been approaching all the churches in the local area to see who has an appetite to build power together and organise. He has had over 100 relational meetings with leaders and neighbours, listening to people’s passions, concerns and self-interests. One organisation was the local Episcopal Mission. They held a free community dinner every Wednesday evening. The leaders and volunteers of this community were interested in the relational organising model and decided to do a listening season facilitated by Spokane Alliance.

Over the month of November 2018, dinner guests on Wednesday nights participated in table talks around what were the pressures they and/or their families faced. Many problems were raised but overwhelmingly homelessness and housing was the decided priority. The listening process surfaced several people ready to do something about this issue and a core team was formed to take some research actions.

The Mission core team was made up of church leaders, mission volunteers and people experiencing homelessness. Organiser Katie Ashmore spent time in one-on-one meetings with most of the core team to better understand their passions, self-interests, capacity and experiences. Relational organising always begins with relational meetings.

Facilitated by Katie, the Mission core team narrowed the big problem of housing and homelessness to a tangible goal: to understand the fastest way to turn local vacant houses into affordable rental houses for those who are currently experiencing homelessness. The first research action involved walking around the neighbourhood mapping the boarded up and empty houses in the area. Woody invited members of other interested local churches to participate in this action too. Together, the group identified a total of 29 long-term vacant houses.

In February 2019, a meeting was set up between the Mission core team and a public official from the city council housing team. The purpose was to present to him the findings of the group and to find out how they might be able to address the housing issue together. I joined in with the group for the preparation of the meeting and the meeting itself.

What struck me was the sense of intentionality with which the core team prepared, and ensured each person had a role. Everyone practised their one-minute introduction about why housing mattered to them. Questions were brainstormed together, then allocated to each member of the team. Potential scenarios were tested, and responses considered. Katie encouraged the core team to be curious and to build a public relationship with the official. The questions focused on the housing issue, but also on getting to know this person working for the council and why he cared about housing. At the end, the confrontation question had to be asked: “are you willing to work with us to address housing in West Central?”

During the meeting, the energy was palpable. For most of the members on the core team, this was their first experience of public engagement. From this relational meeting, the team gathered important information, found an ally who was genuinely concerned about homelessness and gained contacts for other potential allies to follow up with.

Most importantly, the core team experienced what it is like to act together on the issues that matter most to them. Ordinary people from any walk of life could be part of structural change if they can be relational, reflective and action-oriented.

I come from a background in advocacy and research, where I am familiar with the heady tasks of researching issues, analysing policies and writing submissions. These are valid tasks and tactics, but it has always felt limited. What I've learnt from Spokane Alliance is if we want to organise for real power and change, then the starting place is listening and building robust public relationships. The tools and tactics of community organising are fundamentally about enabling everyday people to become leaders and effective influencers in the issue that matter most to them. As diverse peoples and institutions come together, we can leverage our power within democracy for our common concerns.

The question is, are we ready to take the time to build the relational power that we need to act together and to win together? Let's explore this over a coffee and get to know each other.